An Extraordinary Social Experiment About Sex and Sexuality

Let’s Talk About You

Tell what you can do for your visitor and how your service can help.

Conversations on Planes and Trains

Entry to the (Adult) Supplies Store

Choosing the right attitude around expectations

A few months ago, I announced that I was releasing a new book…The book – simply titled, “That Sex Book” quickly took on a life of its own, and the main purpose for it (Igniting Conversations) was quickly and happily realised – conversations flowed;  Like a torrent at times.

For those who aren’t already aware I’ve spent the better years of my life coaching, and being coached by amazing and interesting people, and having exceptional conversations. So, I thought, “If I’m going to reinvent myself as a conversation specialist (Curator), I have to shake things up a bit, right?”

So, I did.  I started talking about what seemed to be one of the most Taboo conversations – Sex.   Not just any old sex either…  sex after 50.   Most of the books on the market about this topic are gag books; Cartoons or pages with empty lines, cashing in on the joke about the non-existence of sex at all after 50. If you type ‘Sex after 50’ into Amazon, the first 20 books listed include 9 released between 1996 – 2011 (back when online dating was still in its infancy), 5 are by doctors, 6 are gag books, and 2 are about quite separate subjects like divorce.  Clearly this is not a subject taken very seriously by everyone.

The book, as I said, took on a life of its own. While, on one hand many, many people wanted to seek me out for conversations, and I was receiving a lot of private messages. There was still very little engagement directly within the social media groups at times.  It was as simple as ‘the more deeply the questions and provoking of thoughts’ occurred the more people would want to talk about it privately – not in any kind of open forum.  But there were lots of intensely curious people wanting to talk or get advice.

I knew I was onto something with this, but of course, the biggest issue is always that I’m only one person and taking endless hours each day to indulge in conversations as the middle person online is fraught with challenges.

Becoming known as the author of ‘That Sex Book’ also created the interesting conundrum of friends making comments around the topic and often trivialising it or making it a joke.  One friend commented one day that ‘Geez Dixie, I can’t think about sex without thinking about you now’.  I retorted, ‘what does your husband think about that’.    Funny, yes, we laughed, and carried on with our coffees.  But as we’ve discovered already people don’t love openly discussing sex (yet), unfortunately that also extended into the ability to even promote this book. No matter what intentions might have been behind the whole project, getting it to market was never going to be a smooth operation.

So that brings me to the societal dilemma that came with this project.  It seems We’re afraid of what others might think about us if we admit to having sex. What does go on behind closed doors is varied, different, and extremely personal.   We may tell our best friends, our doctors and maybe sex therapists what we like, do, or dream of, but that’s it.    We may want to read about it, research with Dr Google, see TV shows about it, and encourage the idea of being sexually open to better conversations about sex and sexuality, but the reality is we’re all too afraid of sticking our heads up and being counted in such conversations,

And that’s OK.  I totally get that.

At the pointy end of launching my book it was time to take stock and check off a few big things that led up to the end of the experiment. ‘That Sex Book’ certainly served its purpose in getting me to this current point of my personal and professional relaunch, and I’m delighted with the outcomes so far.  Being in a position where I had the total support of my family and partner on the project was extraordinary.  But, how far down the rabbit hole does one go?  I believe even more strongly now that our rights and options for talking positively about good sex and sexuality has to be reviewed and that maybe my book has a chance to be part of that process for many people.  I certainly hope so. But – I’ve also learned that a gentle approach to a tough conversation is often more effective.

I’m now ready to announce that Sex is OFF the table. 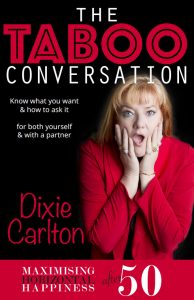 Yes, the word sex is no longer even part of the title.   The purpose has always been to find a way of encouraging much better and deeper conversations about taboo topics.   The word sex does not have to be evident to inspire the conversation about it anymore than black lace and pearl beads need to be part of a sexy photo shoot.    What we do need, is to be encouraged to open up more to each other, about what we really want, don’t want, and are prepared to negotiate or compromise on for the sake of our personal and joint horizontal happiness.  In order to even get there, we also first need to know how to talk with ourselves, and our partners, with honesty and open thinking.

The REAL title is The Taboo Conversations, because that’s far more appropriate for the wider concept of what I’ve been working on this year. Challenging our ability to completely open up is the objective.  Having the conversations that matter is critical.   As Gore Vidal once said: “Sexuality poorly repressed unsettles some families.  Well repressed it unsettles the whole world”.

Here’s the link for a pre-order copy online.

Conversations on Planes and Trains

Entry to the (Adult) Supplies Store