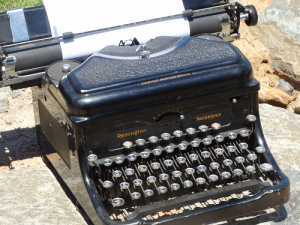 Last week I brought an old Remington Typewriter – it’s gorgeous – circa 1920s, and clearly once used in banking so probably not one that was ever used by a legendary novelist!  But I started thinking about typewriters and creativity.  I wondered if there was a link to those great old classic stories and brilliant journalism and the invention of the computer.

You see ‘once upon a time’ was penned first with a quill, then we moved to pens with ink in them, and about a hundred years ago, typewriters sped things up a bit.   In actual fact, according to Wikipedia Typewriters had been invented way back in the early 1700s by a man named Henry Mill, then throughout the 1800s various forms were created but the first commercially viable version of the typewriter was invented by three men in Milwalkee Wisconsin, Christopher Latham Sholes, Carlos Glidden and Samuel W. Soule.    But I digress….

Now, the computer has taken over, and one of the side affects of writing on the keyboard is speed.  And this is not always a good thing.

Have you ever started typing so fast that your brain was going faster than your fingers, and you found that your mind was stifled by having to correct what you were typing?  Or that your thoughts were crowding through your fingers so fast that you almost lost them on the way down?   Yeah, I get like that sometimes.

The Question of Typewriters and Creativity

The thing with typewriters was that you could type at a reasonable speed, but not at the extraordinary pace that we can now on a laptop. Time to ponder between words may have played out very well for Agatha Christie and Napolean Hill back in the day.

My new old Remington beckoned to me from across the room at an antique show, and I forked over $120 for it (probably many multiples of dollars more than it originally sold for) and carted the very heavy machine away to the car, dreaming of all I might have written on it in another age.  I also pondered what may have been created on it during it’s lifetime of active use.

The reality is, I hated typing at school, because the perfectionist in me couldn’t stand making errors and having to use white-out or typex on the pages.  Cancel and delete before even printing the page is a wonderful thing.  Especially now that I type faster than I think sometimes.

But the question remains in my mind – is creativity the opportunity cost of speed for a writer?